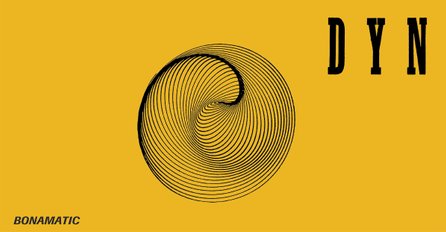 DYN: a periodical published in New Mexico (and distributed in New York) between 1942 and 1944 by the Austrian ex-Surrealist Wolfgang Paalen. The periodical ran through five editions of just 50 copies eachbut it has since gained a reputation as one of the most important publication of the 40s and was of vital importance for the New York School and beyond. Among the contributors were artists such as Pollock, Motherwell, and Newman, writers as Anaïs Nin and Henry Miller and scientists as Bertrand Russel and Albert Einstein.

Paalen's goal with DYN was to combine contemporary art, science and so-called 'primitive' art in a textual and visual montage of knowledge practices to open up a new potential concept of reality articulated as rhythm, intensity, and affects. In his own paintings he strived to free the artwork from references to external reality and create an abstract image dynamics structured by new affectivevalues. In his own words: "Not to paint after nature, but to work according to its great rhythms."

Paalen chose DYN as a short for dynatón, the Greek word for the possible. Nowadays the word has acquired a wider range of significations, thus also signifyinga unit of force and referringto a class of opioid peptides produced in the brain influencing feelings such as motivation, stress, hunger, and abstinences. In one of his essays Paalen writes that art and science are alike in that both systems let the preconditions of the work be directly active in the result: "the analogy between the new painting and the new physics consists in that elements formerly held as cognitive or conceptual a-prioris enter as constitutive factors in the very structure."

DYN is also the name of this exhibitionpresentingworks by Søren Andreasen and Lone Haugaard Madsen, as well as copies of the DYN periodical, in dialogue with each other and together pointing towards a dynamic space of becomings and agency. Søren Andreasen participate with a series of prints combining signs and abstract arrangements. Some of these trigger a perceptual or spatial reading, while other onesappear as open groupings. He is is working withaffects such as the feeling of lightness but at the same time with fundamental mechanisms of how we perceive the world. In Lone Haugaard Madsen's objects and paintingsit is the process itself that seems to ask when something is "finished". Her works are light in method but profound in end-result. Through assemblages of found elements crosslinking to other things and places, they convey a sense of both possibility and necessity.